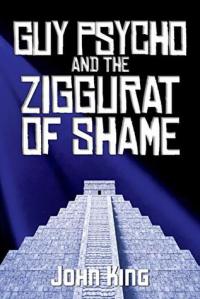 After seven years of holding down the rowdy and fascinating Drunken Odyssey, literature professor, drinker and writer John King, lately of Florida, has released his novel Guy Psycho and the Ziggurat of Shame upon the summer reading market. This writer thinks shame like walk of shame, like you’re wasted. It’s a story about a decadent goth band’s journey to get a decent gig that involves reliving the legend of Gilgamesh for this weird-ass superfan in his fortress in Tennessee that must be modeled on Adrian Belew’s house.

King’s site is full of truly interesting and mostly-useful perspectives on literature, including an entire series on Shakespeare films. Also discoverable is a tender longitudinal document of King’s friendship with Orlando’s Nathan Holic. His name is Holic, people! John’s like breh, I’m a holic too, wenn du weisst was ich meine. I can imagine them together, drinking or eating opium or what the hell King does, and discussing the tough choices of writing novellas.

Where Guy Psycho comes in is its connection to King’s noteworthy love of comic books and B movies, documented on the site under “curatory of schlock.” The reader gets a strong sense when reading down Guy Psycho‘s relatively slender spine that the novel, far from being one of those “serious” books, is to be read as a comic-book ride, which is appropriate since Gilgamesh began as the comic book of its day, as did Faust.

Right away this writer liked how the story is about a fictional band, because fictitious music is some of the best (see hatestep). In the front of the book we get the members of the band conveniently listed, followed by the admonition “style is meaning.” Thanks, professor! The book then drops us into a wheel of speeding events that definitely give flashbacks of harried nights on tour, all arranged to a sort of ritual importance that should not be overlooked just because it’s a crappy band on a crappy tour. Did King play punk rock? “Oh, but Beto O’Rourke did. Did you know he can skate too?” Fuck right off.

Early on in the text we get something of Douglas Adams’ ability to render the prose itself scaled to its significance, oscillating within painstaking precision and hyperbolic decadence, though this attenuates as the plot thickens. King writes to write, and his affinity for comic book slapstick backs up against all kinds of cultural signifiers and name-drops disguised as hallucinations. This writer bets that such economy is probably what he was going for in terms of technique in Guy Psycho. What Carl Hiaasen would read like if he weren’t a boring normy.

The text is at turns cleverly satiric, intentionally “psychedelic,” as some commentators have named it, and often claustrophobically jumbled. Without giving anything away, the whole story is in a series of interiors, and there are times when this writer stopped reading to imagine both how all these vistas would render to the naked eye, as well as how stressful some of these leaps of imagination physically would be. Keep in mind that I did Cumberland Cavern once and am still traumatized. Did King squeeze through Cumberland Cavern before he set this son of a bitch somewhere beneath Rock City? I’ll keep my comments to myself.

Besides our mutual love of Tennessee, ziggurats and made-up bands, I noticed that I easily could grab King’s references to ancient literature, but part of me wonders if the lay reader would get some of the characters’/settings’ intentions/functions. My only critique would be for King to slow down and let us feel it, and to let the characters really work things out. There are some feelings expressed inwardly by the guitar player, but by way of late-placed exposition, instead of an opportunity to test Guy’s ego in front of the family, or make an in-your-face parallel to the relationship between Gilgamesh and Enkidu that many readers might need. Or not! Just thinking on the keyboard here.

As Gilgamesh and Guy Psycho run on epic running-gear, I don’t expect Hamsun’s psychological clarity, but I would like to see the band members really come up against each other’s abilities, will and personalities to provide some kind of tension in need of decision. Without it the book only really pinches at the band members’ high-heel-tortured feet, and reads like one of my 2-Strats comics, where the reader is just along for the ride and doesn’t get to touch.

All in all Guy Psycho and the Ziggurat of Shame is filled with hilarious visuals, insightful gags and a brief lesson in ancient epic. What Guy has to be ashamed of is up to the reader. Don’t download it, dickieeeeee, buy a copy and then give it as a gift after you read it!