What joyous news did I receive today but that Troy or Dead Western of approximately Sacramento has a new song, “PPL ARE SCARED!”
On my massive list of “people I wish I could know better if I weren’t always working etc etc and I hope when we see each other every 10 years we’re still friends,” this dude is definitely in the top rolls of the scroll. And he’s one of maybe five lateral lyricists on the west coast who really have it, not weird for weirdness, but a real command of original usage, metaphor, atmosphere, stuff hipsters can’t fake.
Yes, he has to move his head like that to make his voice that deep, yes he can sing that deep much louder, filling a whole street. I never seen him use a microphone since what, 2006, 2007. Maybe he would if he sold out SAP Center but fools are ignorant.

Here’s a little older one, but not as old as us, I’m sorry to say. 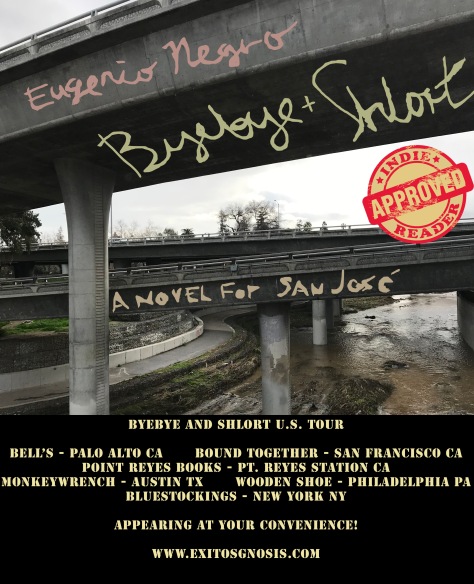 Saw the cats from Owl Bike or whatever at the Local Color gallery’s zine fest in downtown San José and seized on the opportunity to find out whence all the commotion about Louisiana artist Ben Passmore‘s comic Goodbye. 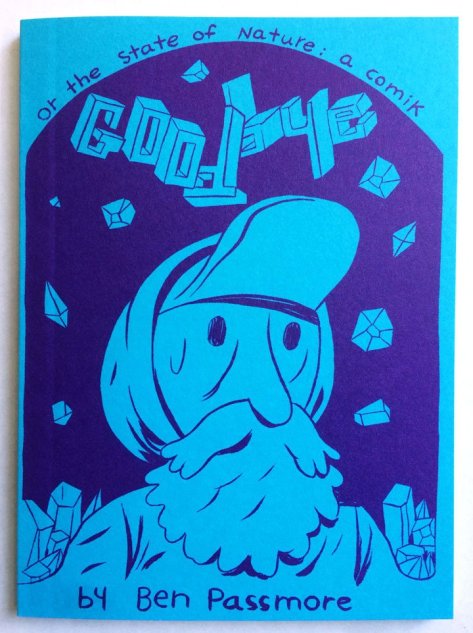 Besides being surprised by the smallness of its quarter-sheet format (because the ad I got in the mail is legal size? Were they trying to impress me?), one association I made for myself when I first started reading was that both Goodbye and Pantomime Horse have a frame of this dead guy lying on the ground, who ends up representing a major conceit in the book revealed later.

I’ll give Ben this commendation: his stuff makes us want to reread it, largely because he has a skill for illustrating and talking around themes rather than hitting them on the nose, which many of us don’t, either for lack of skill, focus or confidence.

Goodbye deals impressively with values, action, and dialectic. In the comic, Passmore transports us from a somewhat startling shift in perspective about yuppie vacationing, through a mysterious and doubtlessly magical explosion, into a self-aware allegory about the conflict within a person over what counts as meaningful intentions and effective action. On the spectrum (sorry, Ben!), Passmore is much more a writer than an artist although the neat and tidy art has its charm.

In guiding us through this dialectic, Passmore wisely begins with the sense of community that we had when we were stupid, unmobilized kids with lots of time and few commitments, rather than shooting straight for self-critique about direct action against the fuckeries of late capitalism and anti-intellectualism. He makes a genuine case for the tiny sweetness found between people when partying and trying to figure it all out. He makes fun of bay area outwanderers (scheiss Auswanderer!) who impose their whatever on our scene –if only they’d move to red states in order to influence federal-level voting trends like Bernie’s meme machine said to without gentrifying our fucking domestic light beer establishments! Believe me Ben, I’m in San god damn José, where they paved the valley of the heart’s delight to make the god damn eBay, and I feel you.

He then makes a joke about group sex and lands us in the lap of a local anarchist, soon to draw us into his spirit with a breath of the aging process and times gone by. Ultimately his message is for us to find the common ground and get together again. What, then, does goodbye mean? Maybe it just means that parting is not the end, but rather the beginning of many happy returns.

As noted above and in our comments on Pantomime Horse, Passmore seems always to be talking around the invisible on several levels, one of them usually comprising hilarious and true imagery from the circles of people in which we operate, and one that’s very personal and spiritual, and which colors the reportage with its tone.

Ben could be a great artist one day as long as he avoids the ironic bullshit and stays on target. Goodbye should get its due respect in the short story world. I wonder if Bird in the Hand or whatever know what they have in him. Get Goodbye! Get several copies and give it as a gift! As Ben rightly reminds us, there are no rights to reserve!

Got this at the Local Color gallery’s zine fest over the weekend right in downtown San José. Purissima concerns a pair of young people who’ve come home from their respective west-coast megalopoli, which of course in 2016 represent the hopeless quest to gain success and meaning from a nonexistent higher rung of success after the conclusion of one’s education. 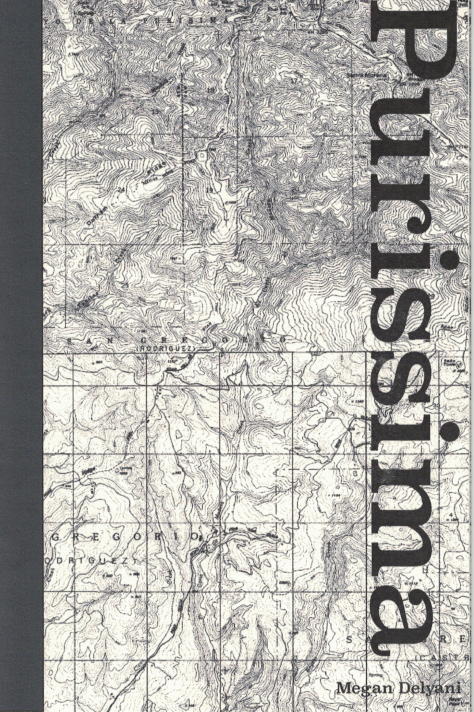 The back of the zine says “Leigh wants answers,” but I’m not sure that the character conveys that, unless only in a very very aloof way. Having made it clear that she doesn’t want to catch up with anyone, Leigh nevertheless lets herself be invited out late at night for donuts by former schoolmate Jen (note the archly stereotyped naming conventions circa 2000-2010 for bookish and popular characters, if only the fault of their pretentious pathetic gen-X parents).

They cruise toward environs that will be familiar to those who’ve haunted author Delyani’s native coastal peninsula, particularly the San Mateo County stretch. Remember those shows they used to have at San Gregorio with the old bar and the campfire ring and there was no boss but just the show promoter??? When Mammatus and the Broads played??? 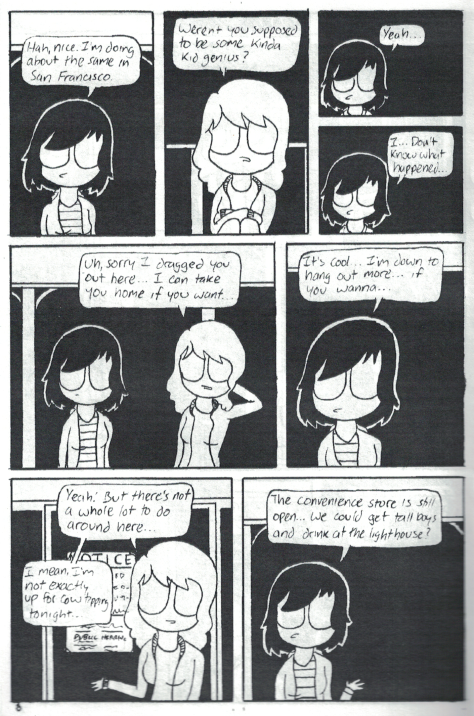 The zine deals brusquely and with late-adolescent acid with the topic of acceptance by a presumably oppressive popular kid in school. It also briefly runs through the confrontation between a humiliated kid and the attacker, and the attempts by the attacker to make amends.

I’d be interested in seeing Delyani pursue this scene further in a future zine, as I’ve been through that myself and would love to see more details and twists and turns in the gut-wrenching process of receiving, recognizing and trying to prove growth from having inflicted that old but significant wound. I’m still upset about the whole two people I was mean to in my life, in seventh grade, even though we’ve since made our peace. I also still hate the one guy that bullied me, mister immature over here…

Find Megan Delyani’s stuff wherever you can!

Imagine if you can that we finally had a bitchin zine show in San Ho at the Local Color gallery on first street, in the exorcised building long tenanted by a Ross. Éxitos Gnosis and I got caught unawares and didn’t table, but we will be there next time for sure. As always, shocked to see that I know like a quarter of the people at bay area zine shows regardless of time, and as always charmed by the young people pushing onward with the form.

Here’s my haul from the show. Reviews to follow. We got Black Tea #2 and #3 from my homeslice Jason Martin, who also did the illustrated stories behind Dylan albums and shit, 1001 Black Men by Ajuan Mance, Ben Pissmore’s Goodbye, Megan Delyani’s Purissima, and Mic.Kit’s I am nothing but garbage, which was exhibited at Caffe Frascati. 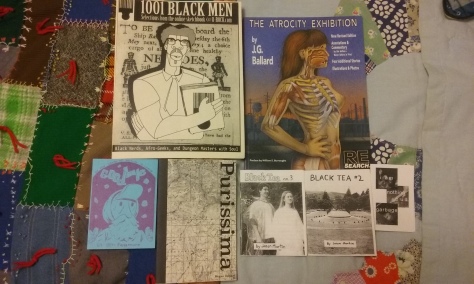 I’ve wanted that god damned illustrated Atrocity Exhibition since I was 17 and now I have it … signed by Vale, pendejos! I think I did him a small service telling him what an impact his RE-Search work has had on me in my life.

Far Cry, the furthest-out literature zine from western Massachusetts, is now available! This digest-size (half-sheet) zine is the perfect home for not-normy writers and those who read them.

Volume 7, published by Anika Balaconis when she’s not running her restaurant and playing punk rock in Greenfield, has five stories. Two of them feel like sketches, or pieces of something a lot bigger. Balaconis’ story The Book of Heroes, for example, took two reads to understand, not because it was really dense, but because the narrator was building up some compelling stuff. It belongs to a much bigger story.

Probably the best story in terms of characters, plot, technique that makes for resonance and enjoyment, is the final story Ages of the Dome by J.D. Hairston. He’s the cook and Anika’s partner at the Brass Buckle. Their band together is called Rebel Base. They both seem like rad people. I’ll have to sneak into the landing gear of an airplane going to Massachusetts and take my chances burrowing to Greenfield.

Ages of the Dome is about a kid who lives in a bubble on a planet Earth convalescing from (probably) ecological catastrophe, and he visits his dad to watch him die with a final high-five, taking all the knowledge of the world before catastrophe, all the lifespan that the new kids won’t live, with him. It hit a lot of stuff I’ve been thinking about, and the characters were executed clean for a tiny 1,000-word story. I hope to read more of his stuff soon.

Anika was kind enough to put one of mine in, too, which also had an ecological theme. This made me happy because I wrote it to order (yuck) for another zine who ended up not using it. Hit the website to order yours today!

I mean, look at this one. That one’s good, but this one looks great. Changeling Press, man. Computer-generated bodies. What am I doing with my life???

Anyway. Long and Short also did one of my stories. Show them love and read some of the books they’re offering!

Why watch stupidass Disney channel crap and Netflix corporate garbage? Read the People’s literature! If you feel like reading Almira and the Backward Family on your device, visit Kindle to download it.

Here’s a review of my story Almira and the Backward Family by a really nice blogger and ebook author called Nagendra Murti. Hit him up!
https://theindiewriterssocial.wordpress.com/2015/04/18/review-of-almira-and-the-backward-family-by-eugenio-negro/