On 14th and Alice in downtown Oakland about 11am this morning we ran into a group gathered across from the Malonga Casquelourd Center preparing to march to the KTVU Fox Channel 2 television studios. Presenters were reading the story of how KTVU intentionally selected a photo for broadcast portraying murdered 18-year-old Nia Wilson with the typical corporate television wash of poverty and violence, a tactic well-known to anyone who’s watched commercial television from Fox to CNBC. They called the decision “dehumanizing.” Other people online have published videos interpreting the meaning of the photo as well as gestures of sympathy.

The group was to march to KTVU and demand that KTVU publish an admission of guilt and that the producers in charge of the decision be held accountable. Artists present to help build the vibe included Khafre James of Hip Hop for Change and the group Samba Funk (hope the link is correct). Cops closed off two or so intersections to allow the marchers to fill the streets on the path.

In fact, East Bay Express’ Josh Slowiczek beat me to publishing this story by an hour, so you can read his more in-depth piece here. We can corroborate Slowiczek’s number of about fifty people in the march at any given time. Those interested in contributing should find the Facebook and Instagram hashtag #Justicefornia.

In order to understand, the reader must let go of the racist and classist conditioning that controls perception of people we see in media: the person of color is an aggressor, the white person the victim. Nia Wilson was 18. That makes her a fresh highschool graduate. She could’ve been any teacher’s student, any parent’s child.
Her skin color and socioeconomic inheritance put her in the lowest class in the US, a measly 12% of population for whom the country can’t find a shred of empathy. She was murdered at the MacArthur BART last weekend almost certainly by cracker John Lee Cowell, who was also charged with attempted murder of her elder sister Lahtifa (sources have also Letifah, Latifah; correct spelling unconfirmed –there you have it with the white media) on Wednesday according to SF Gate. 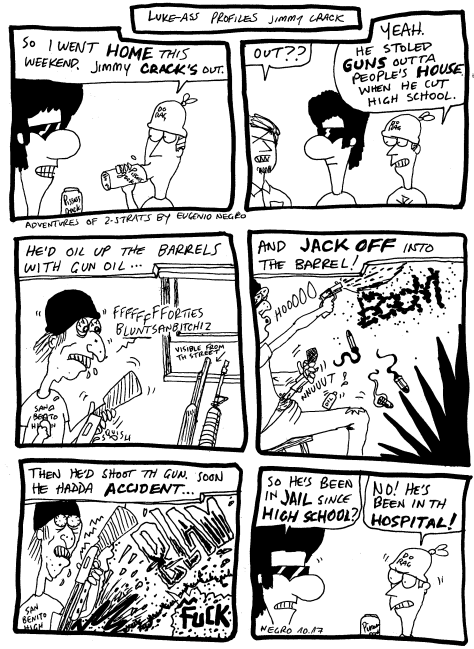 So we don’t mind treating veterans like shit but we fall for every little gesture they make on behalf of empire, grasping up their sentiments for our own like good little consumers.
A handful of white men who happen to be veterans bow down and “beg forgiveness” according to the article for 500 years of war crimes against native Americans and we’re all supposed to be touched?

This is nigh empirical proof that white men don’t have the strength of character not to be liked by someone. This is a “check your privilege” situation par excellence. Maybe we shouldn’t raise them anymore to please the power structure through work, rape and killing. Leonard Crow Dog, this is coercion! Don’t be fooled, stand your ground!

Where is the fucking thing. Here it is. Let’s do a little “middle class fake white guilt and people of color who went to college empathy” experiment shall we? Let’s see how yall comment on this.

Possible quote: Hey I’m Wes “Columbus” Clark, I’m looking for a reality TV show or something, and I came out here to get some attention! Maybe the Pentagon will even get some sympathy from the people after waging war for 100 years for oil and Lebensraum, that could raise my pension or something!

Or maybe Salon is trying to make its own reality since President Trump has sanctioned that for them. Anyhow, now is not the time to forgive and forget, people. White people, North Americans, the three Abrahamic poison religions, have never been held responsible for what they’ve done to the world. We need to consciously inescapably KNOW that the world hates us for a good solid 200 years, then when the ego and the power are long gone, we can start talking about reconciliation. If the suffering does not come back around, the apology then remains part of the violence. First of all, you apologize and your NEVER ask for forgiveness! That’s not your role in an apology!

I charge Wes Clark with capital phoniness, the press with yellow wishful thinking, and all yall motherfuckers with stupidity for lending your (doubtless mostly empty) good feelings to news of this trumped-up event.

The year is 2073. “Hey Uncle, remember when you shot Grandma to death by accident when you were 2?”

Click on the link to read the comic!
http://thenosemilk.com/news/world/usa/us-courts-modern-sheriffs-of-nottingham/