The great great Anika Balaconis has done it again with Far Cry #9, the biggest little speculative fiction zine in the scene, published while she’s not punking down and running her own restaurant in Greenfield, Massachusetts. 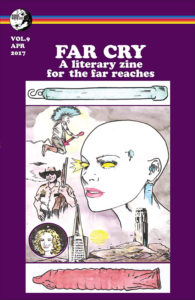 Authors Andrew Massey, Jean Paul Garnier (namesake of the condoms and glowsticks on the cover) and Joe Urson are featured besides Anika’s own story, and she put one of my stories in too!!! Audio version of the latter here for those of you too busy, too nonprofit or too ‘post-literate’ to read. Cover artist London Roman also has an illustration in the back, like a single page from a longer comic, to round it out.

The cover image also gets my approval for featuring the west coast, and a punker wailing on a guitar. Get on Far Cry, or find Éxitos Gnosis, and get yourself a copy today while they last!