Now this is poetry, people. I should have this on regular rotation on my nightstand. And more Heine, too, I suppose. Few poets’ language really speaks to me, and Baca’s has always gone straight to the heart.

As part of the Progressive Asshole Tax, there ought to be a Form JB1: whether you’ve read some Jimmy Baca this year. Would read approximately as follows:

If YES, thanks for filing this form. Please itemize the poems from this year in the space below and return; notice will be filed that no further action is required.

If NO, one percent up on your taxes, jueputa!

If WHO’S JIMMY BACA?, two percent up on your taxes, asshole!

Thanks to computers, failure to show progress could be set to automatically interfere with car registration, smog certification, credit rating, passport, probation status, whatever it god damn takes to get people to spend some time with this stuff.

Felt it may be useful to someone to strongly recommend seeing Aronofsky’s new film Mother!, and commend it for almost hitting true surrealism. Obviously I’m not a film critic, but this may be useful yet, as I consider Mother! not be popcorn, but art.

The film is essentially a critique of the Will, definitely in the nietzschean sense, and not so simply a plea for mother earth, et cetera, as some better-circulated critics have proposed. Javier Bardem is the artist husband of Jennifer Lawrence’s architect, the latter of whom has rebuilt the husband’s burnt-up huge country manor. We learn throughout the development of the plot that “life itself” is threatened by the cost of the will of humans to create according to their own perceptions and appetites. The reader may disregard the reportedly partly-intentional comparison to Rosemary’s Baby, a marketing ploy that was vulgar, off-point and doubtlessly made up under a deadline.

The house that the wife inhibits is her own skin, as she bloodily explores whenever unwanted guests cause little gashes to appear in it. Aronofsky takes us under her skin, into the scary cellar, and then pulls the scares right when the audience thinks it needs one, only to show us that what matters now is what happens above the skin. Ed Harris and Michelle Pfeiffer deliver a hilarious metaphor for the disruption of one’s sense of safety, and the photography has the house darkening and yellowing with each disturbance, only clearing up to bright and white (the wife’s daylight bathroom is a sort of relief two thirds in) when the wife is pregnant and left alone.

Meanwhile the husband seems to nourish himself artistically from the chaos and destruction of the kitchen, but we all know that he suffers from a basic will to be needed and loved by his audience. Indeed one of the most effective elements of the film is that, when unwanted guests nightmarishly gain access to the house before the wife’s complaints, she is met with either incomprehension or rage, as if the universe did not contain a rule for ordering or understanding what she wants.

I commend the film highest, as mentioned, for coming close to surrealism. In the beginning, especially, I was getting huge hints of Gilman’s infinitely-interpretable Yellow Wallpaper, and until the end of the second act I was feeling the beating heart of Luis Buñuel’s long post-Mexico phase. I have no idea if Aronofsky intentionally reached out to grab hands with Buñuel and Lars von Trier, but if you’re going to get help, get help from the best, right? The dialogue and action effectively render the unconscious terror of having no privacy, of bearing alien responsibilities foisted upon us from nowhere, of being the stage for the will of others.

Lawrence has a lot of lifting to do, and she does it as quietly and wordlessly as possible, and I don’t blame her. Bardem works ultimately like an archetype, and that works. The real fun is in the hands of Pfeiffer and Harris, who stoke the insecurity of the two stars. Although Bardem’s character is the closest to a clef that the story is going to get, we are stuck in the film with Lawrence’s perspective, militantly photographed with her face at front and center, the plot elements beautifully whirling around her with a perfect balance of narrative force and the wife’s psychological echoes.

The film has rather a heavy shift in the third act; it’s not a tonal shift but rather a tonal acceleration, to put it synasthetically; some viewers may not go for unless in for some straightforward symbolism. For this reason I also caution the viewer not to spring for the Biblical reading, which simply is not enough nor any fun for the quality of this movie. The final scene elegantly closes the conceit about our will to have things as we imagine them, and what destruction it’s caused the world. I’ll leave the reader to figure out what it’s all modeled on.

Personally, I interpreted the incursion of the late-capitalist scarcity warzone into the couple’s house to be possibly an attempt by Aronofsky at a re-do of the somewhat awkward evolution-into-selfishness-equals-war riff at the finale of Noah, and I respect that. The final scene elegantly closes the conceit about our will to have things as we imagine them, and what destruction it’s caused the world. I’ll leave the reader to figure out what it’s all modeled on.

Ultimately I for one will give the film a lot of slack for some of its more decadent moments, because honestly I grew up watching Aronofsky, starting with Pi, I know how he works, and I’m a fan. But regardless, I encourage any lover of artistic effort to slide down to the cinema and keep the auteur in business, savoring the photography, the slices of film history and the wide variety of possible interpretations.

The next act of the night at the Clink is pretty bad by any metric, and Stretch has enough.

A comic about sniffing half a Peru and the outrage it caused listeners to daytime talk radio. Makes us wonder if Imus’d lived to be a DJ if he’d done the whole Peru…

You are here to learn the theory and practice of Shiticide. Boys will be organized into Shiticide Slaughter Troops … We’re not fighting for a scrap of sharecropper immortality with the strings hanging off it like Mafioso spaghetti. We want the whole tamale. The Johnsons are taking over the Western Lands … And we are not applying in triplicate to the Immortality Control Board. Anybody gets in our way we will get our communal back against a rock or a tree and fight the way a raccoon will fight a fucking dog.

The Place of Dead Roads

Need to repost this article. It’s got an excellent source, and it also reminds me to look up that Angela Davis book about prisons being obsolete. Read on and do something about it! 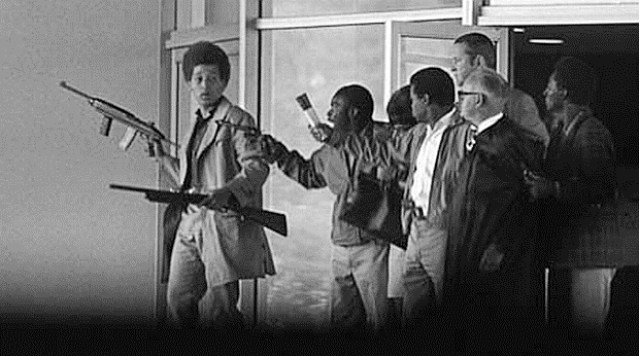 By Incarcerated Workers Organizing Committee A response to the debate on abolition in Jacobin Magazine. The weekend of August 19 2017, amid the second nationwide inside/outside mass protest against prison slavery in as many years, Jacobin Magazine published an article against prison abolition entitled How to End Mass Incarceration by Roger Lancaster. Lancaster argued that returning to an […]